Development of Road 83 to be divided into two sections

Everyone living in and around Pápa is interested in the development of road 83. Recently talk has been going around town that the road will only be constructed between Győr and Tét. Local journalists have investigated the topic.

It’s well-known that the preparations for the development of road 83 are under process. According to the Ministry of National Development, the entire road between Győr and Pápa will be reconstructed.

Győr-Tét section will be financed separately

There will be a road constructed outside the villages between Pápa and Győr. It will be a 37 km long, 2×2 lane road. During the planning phase they realized that the chances of getting more financing from EU funds is higher if they only apply for the Győr-Tét section (which has the most usage according to statistics).

In order to be able to access the available community EU funds, the development team thought it best to divide the road into two sections. The idea of the division will be announced to the Integrated  Infrastructure Operational Programme upon their seasonal inspection of the project.

According to current plans both road sections’ construction will take place at the same time. The actual construction is planned to begin in the second half of 2018, and the expected date of being able to use the road is summer of 2022. 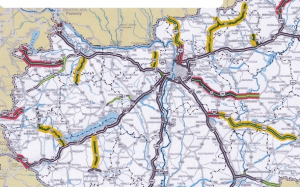